Marek Brzozowski, Brzozo as he refers himself at his exhibitions, has been giving lecture on graphic desing, illustration and typography in Bilkent University since 1993. He has attended both solo and group exhibitons that are more than 100 in various provinces of Turkey in last 20 years. He also received worldwide prizes for his posters and logo designs. Brzozo states that living in Turkey has become a new source of inspiration for him. Lets get to know him with some of his paintings:

This article is written by Rasih A. and translated into English by Asena Çakan. You can find the original article in Turkish here. 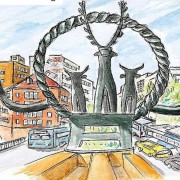 A Splash of Color in the Streets of Ankara

Introduction to Ankara’s street art… Erin, Cem, and Gökhan are three young artists. On the spur of the moment, they grabbed materials and started to...

A Secret Gallery Among the Streets: Muhammed’s House

Muhammed’s house appeared before me among pale-colored buildings whilst rambling around the back-alleys in old Ulus district of “grey” Ankara. A two-story house, rather small,...